A Future Without Houses 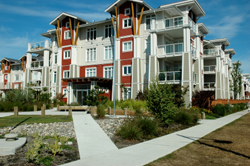 Periodically, we are reminded that the average Northern European -- while living every bit as comfortably as the average North American -- consumes only about one half of the petroleum fuels that we do. People pointing this out then often refer to the smaller, more fuel efficient cars used in Europe, and to Europe's generally superior urban mass transit systems, in suggesting an explanation.

There is, however, a far more basic reason: The average European lives in a multifamily dwelling in close proximity to his work, whereas nowhere else but in North America has there developed anything akin to our mania for the unending building of detached single family houses.

Consider, briefly, the enormous price we are paying for our fixation on houses: